John, Ian and I left for Cairns at 4:00 a.m.  We went to Rusty's Market...my last time.  I said good-bye to a couple of the vendors we buy from.  Carol was there shopping, as usual, so we said our good-byes.  Carol is a former client of John's who follows the lifestyle to near perfection.  She is originally from New York but has lived in Cairns for 30 years or so.  She's beautiful and very stylish.  I wish I had a picture of her, but I never got one.  She left me with the words, "Practice well."  I hope to do that...practice well.
John had packed Ian a lunch for today, but Ian had to purchase his food for dinner on the plane.  He has been advised not to eat the airplane food.  He got cherry tomatoes, corn, avocado, cucumber, and a couple of apples.  Ian teared up at the market from the emotion of leaving.  He has had a full two weeks of learning how to look at things from a totally different perspective.  He has enough information to get him started.  He will be able to consult with Dr. Fielder via Skype whenever he needs some support.  I hope he will find a raw foods group to meet with in Sydney.  It's harder when you get around friends and family that don't see what you see. 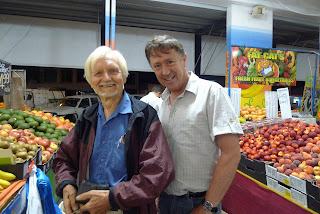 Next we went to the radio station so John could do his radio program.  I said good-bye to Ron and Chris who do the morning show there at the station.
We went to the co-op for pecans.  I bought two shopping bags that I have had my eye on ever since I've been here.  Then one last time to get sugar cane drinks.  What on earth am I going to do without sugar cane drinks? 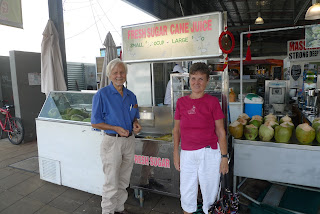 We went to Cairns Central so I could make one last trip to the souvenir shop.  I bought more caps, tattoos, bookmarks, and a bar of Billy Goat Soap for my Mom.
We went to Captain Cook's Laundry.  I said good-bye to the ladies there.  They do excellent work, and I told them so.  John took them some plantain bananas that he grew on his farm.  We made one last trip to Cairns Craft Store so I could get two more balls of yarn since it will probably be impossible to match it once I get home.
We took Ian to the airport about 10:00 a.m. and told him good-bye with big hugs.  Ian's plan was to check his luggage and take a shuttle back into Cairns so he could sight-see for a while.  He was going to eat his raw food lunch down on the Esplanade while he took in the view of Trinity Bay and the Coral Sea. His flight to Sydney was at 5:00 p.m.
John and I stopped on the side of the road to buy a tray of organic mangoes from a guy from Cookeville.  Too bad I won't get to eat any of them.  They are not ripe enough. 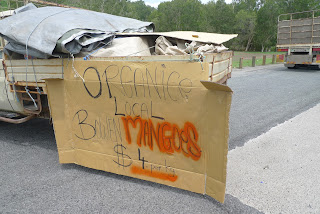 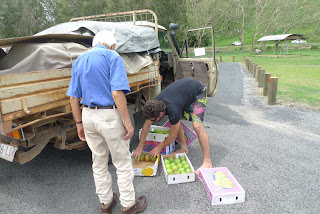 We cleaned out the safe where John keeps some of his produce, put up all the food he bought today at the market, and then prepared lunch.  My lunch was watermelon, a little mango, avocado, grated coconut and a banana.
My suitcases are nearly packed.  The trick is going to be keeping the big one under 20 kilos.  I have dragged it over to the office twice already to weigh it.  The first time it was 23 kilos.  The second time it was 18 kilos but since then I've added a pair of socks.   I don't know how accurate John's scales are, either.  They are pretty old.  I may have leave behind my athletic shoes which I have pretty much ruined here anyway and my robe.  I thought I might have to leave my new music stand, but that is the thing I am going to try to bring home if anyway possible.
John said the other day that when your neck hurts it indicates a problem with your digestion.  Well, my neck is bothering me today.  A massage would feel good...but that would be addressing the effect and not the cause.  I ate some pistachios last night after meal time.  That probably did it.  It's important not to overeat on nuts or seeds or any concentrated food.
Supper was tomato, cucumber, avocado, sauerkraut, fresh organic corn, pecans and a date.  It's important to only eat organic corn.  Almost all corn is GMO in the US unless it is organic....or you know the grower who will vouch that it is not GMO.
People are afraid of cancer because they don't realize they caused it, and they can reverse it.  Even in the cases where it has gone so far that perhaps it is not reversible, if the person will change his lifestyle and live in harmony with the laws of nature he will have the best quality of life possible.  The sad thing is that fear keeps people from doing the thing that makes sense.
To health and happiness.
John said the
Posted by Janis Hopper at 2:15 PM