I got up at 3:00 a.m. to spend the day in Cairns.  I even sneaked on a little eyeliner, mascara, and lip gloss.  I didn't get a chance to straighten my hair, but I wore my Brighton jewelry...the charm necklace, the earrings that Molly and family gave me for Christmas, and the charm bracelet that Travis gave me for my retirement.

John, Jim and I left for Cairns at 4:00.  Our first stop was Rusty's market.  We were among the first customers.  John bought papaya, lettuce, tomatoes, avocados and mandarins. 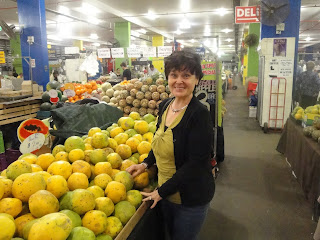 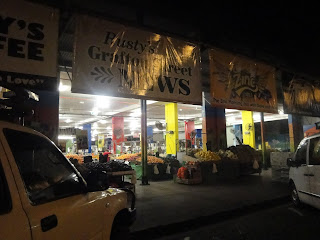 Then we went to the radio station where John recorded his program.  It is a small community radio station manned by volunteers.  I met another DJ named Ron and the office manager, Chris  There were two computers at the station so I got to use one and Jim got to use the other.

We took Jim to the airport about 9:00 so he could fly home to Melbourne.  John took me back to Rusty's and bought me a sugar cane drink with lime.  It is WONDERFUL!  I hope I get to have one every week.  So good!  John says you can buy them in China Town in New York City.   I hope they are available in China Town in Philadelphia!  He said to look for Vietnamese vendors. 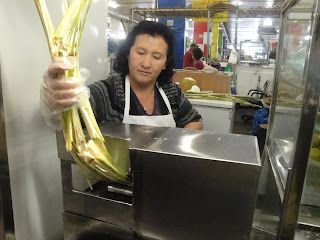 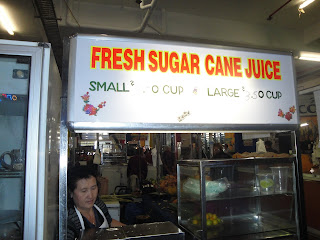 John had to go back to the station to do a live program.  I bought a map of Cairns, and I was on my own for four hours.  I walked down to the Esplanade which runs along the Coral Sea.  The yachts behind the Yacht Club were quite impressive.  I walked down the boardwalk and down some of the streets.  I bought  postcards in a little shop.   Then I went back to the Esplanade and sat  by the fabulous pool where people swim to have my lunch of papaya, avocado, pineapple, mandarin, and banana.  Two Asian girls who are studying English at the university interviewed me for a class assignment. 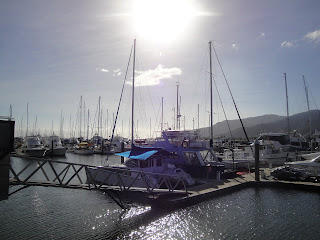 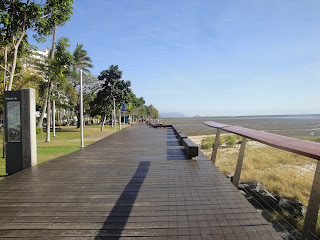 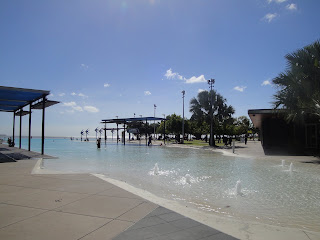 I walked over to Cairns Central to buy a notebook and a pen at Target.  In the chemist (drug store) I bought a box of Kleenex.  I can't afford to buy anything else here.  Everything is so expensive.  I found a fishnet looking shopping tote that I liked at a little shop.  I thought it was $4.50, but it was $45.00, so I left it there.  I like my Trader Joe's shopping bag just fine.  The fishnet bag was made entirely by hand in Papua New Guinea.  For some reason that made it expensive.

I got back to Rusty's in plenty of time for John to pick me up at 1:30.  I took my clothes to the laundry.  The lady there will wash, dry and fold them and have them ready for me to pick up next Friday for $12.00.

We went to a nursery in a nearby town called Freshwater and bought some herbs and vegetables to plant next week.  We got two kinds of parsley, some tomato plants, several types of lettuce and celery.

John drove me around a bit to do the tourist bit.  We went to a place call Crystal Cascades.  It was a 5k walk to the top and back to the car.  We had dinner back in Cairns at the Esplanade at a park bench...lettuce, tomato, avocado, sauerkraut, and pecans.  John had a board meeting at the radio station at 5:00, so I sat in the car to rest.  I slept on the way home and was in bed by 7:30. 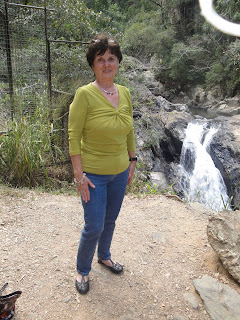 I told John yesterday about how my bones and knees hurt so badly when I started the Couch to 5k program. I could hardly walk.  My bones felt like they were broken...split.  My knees felt arthritic, and I could not lift my legs.  So painful.  It hurt so badly that I thought I would not be able to do the program.   He said the pain was from working the grunge out of my joints and bones.  He said to never be afraid when you are doing the right thing.
Posted by Janis Hopper at 3:10 PM