I got up at 3:20 and dressed to go to Cairns.  We left at 4:00 and got to Rusty's Market at 5:00 a.m.  John likes to get there early because then he gets his choice of the best food.  I visited for a minute with Carol (originally from New York) about her diet.  Carol is a former patient of John's and eats only raw.  She has gone through times when she added cooked foods back into her diet, and would eventually find herself lower in energy.  She said she finally realized, "This works!"  The simple, raw diet just works.  Carol is at the market at 5:00 a.m., also, stocking up on good food.


We went to the post office for John to check his mail, then we went to the radio station.  I did my blog from the computer at the radio station and then spent the rest of the time looking at hotels in Sydney.  There were special guests at the radio station this morning.  Two young saxophone players came in and played a couple of songs on the morning show.  They are publicizing their fund raiser for a trip to New Zealand.
We went back to Rusty's for a sugar cane drink.  I am in love with those drinks. 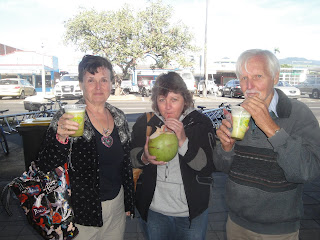 Today's a holiday in Cairns.  Almost everything is closed because of the Cairns Show.  John dropped Karen and me off for a couple of hours so we could check it out.  There were exhibits of photography and other art that had been judged and awarded ribbons, similar to our fairs.  There was a hall of industry and a midway.  There were booths, rides, and concessions.  Karen and I looked inside the campers (they call them caravans) at one of the exhibits.  They are priced three or four times what they would be in the U.S. 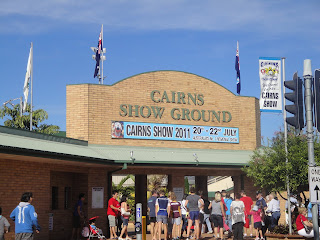 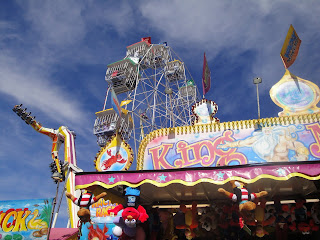 There is an arena with something going on all the time.  You could stay all day up until the fireworks at 9:00 at night.  We saw an equestrian event.  The riders looked very British in their riding habits. 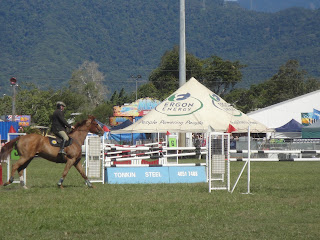 John picked us up at noon, and we had a picnic lunch beside the Coral Sea.  We had papaya, avocado, custard apple, and banana.

Back at the farm, we had consultations at 2:00.  Karen's temperature had gone up to 37.1, so she will begin fasting tomorrow.  I did some laundry by hand and got it out on the line.  The laundry was closed because of the Cairns Show, so we were unable to pick up our laundry from last week.  After that, I rested until supper.  I felt really sleepy after getting up so early.

Karen wanted fruit for her last meal so I had fruit with her.  Supper was papaya, pineapple, avocado, coconut, and pecans.