I woke up several times during the night because I didn't want to miss my ride to Cairns.  I really think John would drive off and leave me if I didn't get out to the car at 4:00 a.m. as he's driving off.

Last night I had a dream that Travis and I were renting a house in Hot Springs.  It was probably 30 or 40 years old, not bad, but not re-modeled.  I was thinking that Travis and I should move to Sparkman or somewhere out in the country in Dallas County.  I asked Harris and Molly if they could think of any reason to retire in Hot Springs.  Harris said, "Yes.  We know thousands of people here".  I was able to see that was a good reason, and I began to think about buying the house we were renting, fixing it up, and turning the back yard into a garden.

We got into Cairns about 5:00 and went to Rusty's market and bought the produce for our meals next week. We bought a fruit called a longan.  It has a outside covering that has to be peeled off.  It reminds me of a scuppernong on the inside, but not as good. 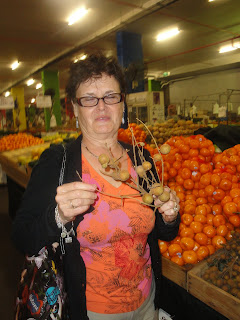 Then we went to the radio station for John to record his program.  I got on one of the computers there.  There wasn't any communication from home, so I researched tours of Australia until 8:00.

At a little after 8:00 we went to the laundry to pick up last week's laundry and drop off the dirty laundry to be washed this week.  We went back to Rusty's for a sugar cane drink.  These are so very good.  Anyone that is near an Asian market should check to see if they have anyone making sugar cane drinks. Next stop was the food  co-op for pecans and dates.  Pecans are over $40.00 a kilogram here.  A little bag was $14.00.

John went back to the radio station and I was on my own in Cairns for four hours.  I walked the enter Cairns Central Mall.  I bought some mousse for curly hair

I went into a couple of Australia tourist shops and took some pictures of some boomerangs.  I learned that there is such a thing as a real boomerang and a decorative only boomerang.  The real boomerang has a notch cut into the back so that it will return.  There is also a killer boomerang which is not recommended for children to play with. 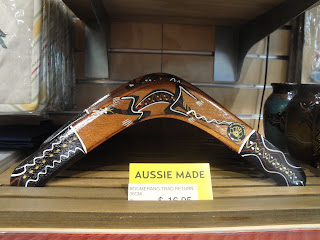 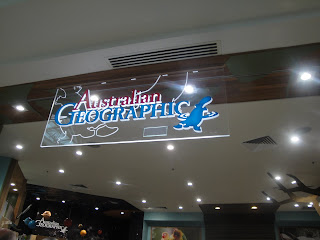 I walked the Esplanade and checked out the tourist shops along the way.  I bought some postcards to send home.

I had my lunch at a picnic table overlooking the Coral Sea at the Esplanade. 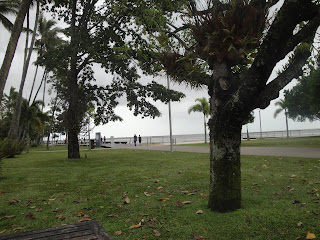 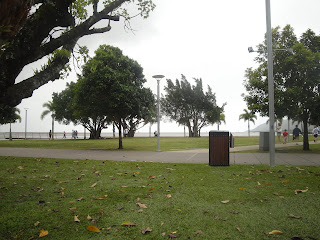 I stopped at a shop that books tours and got some brochures for destinations to consider if I get a chance to travel some while I'm here.  Then I went to Tiny's, a vegetarian restaurant, and got a veggie cocktail made with carrots, celery, beets, spinach, and parsley for $7.00.  I needed a place to sit and they claimed free wi-fi, but I was never able to get on-line. 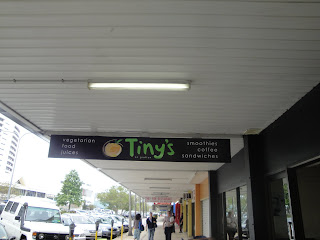 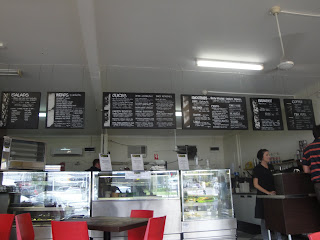 I went back to the food co-op where I was supposed to meet John, but he wasn't there.  My feet were hurting so I went outside and sat on a bench.  When he was about 30 minutes late, I started wondering what I would do if he disappeared.  I guess I'd catch the next flight home.  haha  I finally went back into the food co-op and found out he had been there and left about five minutes earlier.  I decided to just stand out front and wait.  He finally appeared....worried about what he would tell my family if he lost me. 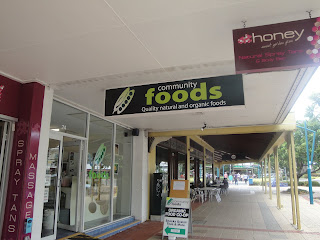 We stopped at another market on the way back to the farm and got some cherry tomato plants.

For supper I had sauerkraut, tomato, avocado, and grated carrot.  A lady vendor at Rusty's this morning gave us the carrot after she dropped it on the floor.

I put my muddy blue denim work shirt in to soak tonight.  I couldn't leave it at the laundry because I can't do without it a week.  Then I practiced my flute, looked at brochures, and read until I couldn't hold my eyes open.   Probably about 7:30.

There is a new lady arriving next Saturday who will be staying here for 3-5 weeks.  It will be nice to have someone in the cabins with me.