I talked to Travis on Skype this morning.  All is well at home.  I talked to my sister, Sheila, on Skype, also.  Then I messaged a bit with Harris and Amy.  I love the internet.

I caught a bus to Elsterwick Station and then caught a train into the city.  I met a nice man at the station that helped me figure out how to get back to here from the city this afternoon.  He placed my accent as Texas.  Pretty close, huh?   I loved Melbourne.  It has a European feel. 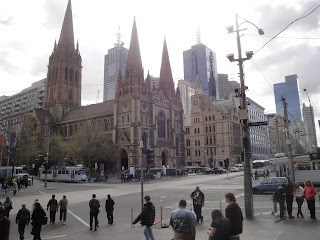 It was fun to just walk around and get the feel of the place, buy some postcards and take the free City Circle Tram around the city.  The free tram is a hop on hop off type of thing.  Since I didn't have a plan, I finally decided to hop off at the Carlton Gardens and Royal Exhibition Hall and Melbourne Museum.  It was lunch time, so I had the Egyptian Salad at the museum restaurant and a raw food bar I had in my purse. 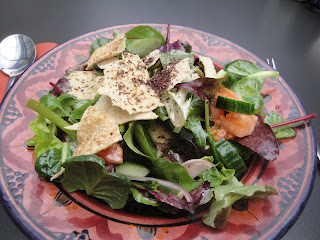 I went through the Tutankhamun exhibit. and then went quickly through the forest exhibit of the trees and plants of Victoria. 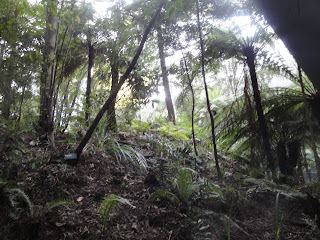 Time was an issue so I made my way back to Flinders Station and caught the train and bus back to Elwood.  On the bus I met two young guys from Wales.  We were equally lost so tried to help each other.  They plan to work here for a couple of months to get money to go to New Zealand.  They were young, on an adventure, and nice.  I told them about the Welsh Tract Church in Delaware.
http://www.hmdb.org/marker.asp?marker=39553

I checked in with Bruce at his store, bought two raw food bars, then went up to my room to freshen up for dinner and rest a minute.  I was bad and snacked on some raw almonds.

I went to dinner with Eve and Catarina.  Eve is a customer at Bruce's store.  She is a raw foodie from Germany.  It was her 50th birthday.  Catarina works in Bruce's store.  She is from a small village in Mexico.  We went to the University of Melbourne and picked up Eve's daughter, Sarah.  Another young lady, Toriro, met us at the restaurant.  Toriro is of Somalian background, and her father teaches at the university.  We went to a place called Lentil As Anything.  The restaurant is located in the Abbotsford Convent.  There is also a Steiner School in the convent.  Before dinner we watched the school children performing a circle dance in renaissance costumes.  The restaurant has a unique story.  All the food is fabulous and vegetarian.  It was started by a man from Sri Lanka who now has three locations around town.  Many of the staff are volunteers.  The food is served buffet style, so you serve yourself.  They do not bill you for the food. You put your money into a donation box.  You pay what you think it was worth and/or what you can afford.  The place was packed when we were there.   There was a live jazz band playing, too.  Lovely evening...my supper was a salad and lots of cooked, vegetarian food...rice, curried carrots and sweet potatoes, a noodle dish, a veggie dish...a couple more I can't remember.  That is the first cooked food I have had since 6/17.


It was interesting to listen in on a conversation that Eve had with Toriro about how she could expect to be received in the different nations around the world.  She talked about France and Denmark.  Then she began to talk about America.  She had always thought Americans were arrogant, but when when she visited America, she found out that that attitude is not arrogance.  She said that Americans have a faith and a confidence that is unique.  They are also quite an open society and accepting of all people.  She said that even though America is in trouble right now, the people don't seem to know it or be worried about it....back to that confidence and faith.  She and Toriro both agreed that the American dream gets embedded into the hearts of the people.  Their question....how to get that attitude and feeling into the people of other nations?  They said all this much better than I am telling it, but I so enjoyed hearing them talk about this.  It was a lovely evening.
Posted by Janis Hopper at 4:31 PM