I dreamed about Jenelle Peterson last night.  It was quite real.  We were talking about all the things that had been done and said since she passed away.  I needed to tell someone that she was talking to me, but no one else had heard her.

When I woke up this morning my bathroom was occupied, and I had to wait a long time to get in.  I needed my Lugable Loo bad!

About 8:30 I walked a few blocks to Central Station and bought a two day pass for the Hop On Hop Off bus.  I asked if they had any discounts and the lady said, "I hate to ask but are you...."  I said, YES!  So since I am a senior I got two days for $40.00.  The HOHO bus is good for getting the feel of a city.  You see all the major sites plus get the commentary. 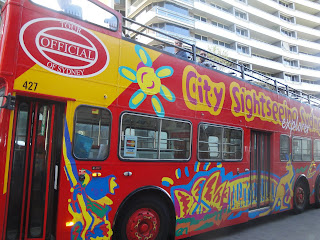 I hopped off at the Sydney Opera House.  I bought a ticket for the Saturday matinee performance of La Boheme.  The ticket was $155 but it allows me to see the English subtitles.  Then I spent $8.00 for an order of FRIES!  I know.  I swear that was the best choice I had for lunch.  I ate my fries and looked at Sydney Harbour while chasing off sea gulls that were aggressively demanding food.  This was not Jonathon Livingston Seagull.  This was those other birds...the ones that only thought about eating instead of flying.  I think they were there to remind me I should be flying instead of eating fries. 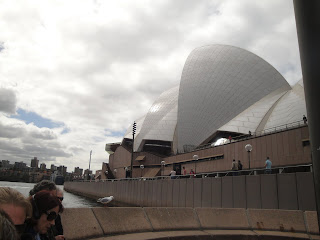 I paid $29.00 to take the tour of the opera house.  It has quite a story.  Here is a link for anyone that is interested.  http://jornutzon.sydneyoperahouse.com/househistory.htm

In the afternoon I took the HOHO bus to Bondi Beach.  There was a shop that made me a fresh juice with watermelon, orange, and pineapple.  It was good and ALIVE!  The beach was beautiful.  It's famous for being great for surfing, but I heard one old dude telling his mates that the surf was not very good today.  That water had to be cold! 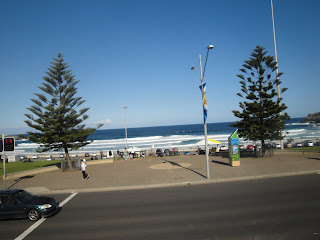 There was a restaurant on the beach where I got a lovely garden salad and a vegetable juice made with beets, carrots, celery, and ginger.  At a place called Fresh In Bondi, I bought two oranges, a grapefruit, an avocado, two bananas, and a bag of mixed seeds/nuts/sultanas.

I visited with the HOHO driver from Bondi Beach because I was too tired to climb the stairs to go on top.  He recommended a couple of ferries to take from Circular Quey.  Turns out that even though he is from New Castle, Australia, he went to boarding school in Delaware for five years from the age of twelve.  His profession was journalism.  He lived in McAllen, Texas until two years ago because of some business interest he had there.  I said, "That's a dangerous place."  He agreed and told me that after he was broken into the third time, he bought a pistol.  Interesting man.  I don't know why he is driving the HOHO bus at age 72.

At Sydney Central, I went into the lounge area to access the free wi-fi for a while then went back to my room and ate my RAW LIVING FOOD supper.  It was good.  I have plenty of fruit to take with me tomorrow, so I will be good for lunch tomorrow.

I washed up with cold water and put on my sweater over my pajamas and robe.  It's cold again in my room.

My sister, Sheila, suggested I find a better place to stay.  I seriously considered it, but I have paid $71.00 a night for a private room here.  The other hotels in Sydney that are not hostels range from $250-600/night.  I think I'll stick it out here.  They have given me free wi-fi and it is normally $2.00/night.  Besides I want to put off as long as possible having to get my bags down all those stairs.  There are 58 stairs.

To health and happiness.
Posted by Janis Hopper at 12:54 AM