I got up at 6:30 and read from the Robert Fulghum book, the Bible , and Heidi. I washed my hair and showered.  My next shower will be tomorrow at my hotel room in Cairns.  I did one last load of laundry and packed my bags as much as possible.  David was at work so I used his computer to check on everyone at home.  I ate seed/nuts and watermelon.

I decided to take the bus into Brisbane to the Queen Street Mall and get the things for my knitting project.  I got Patons Learn to Knit book with 19 easy projects, 4 balls of Patons Inca Yarn, bamboo knitting needles (7mm), a tape measure, and a wool & yarn needle.  Grand Total:  $52.05.  This will give me something to do besides eating!  Can you take knitting needles on a plane?  It would be something to do on the 20 hour flight home in December, if they allow it. 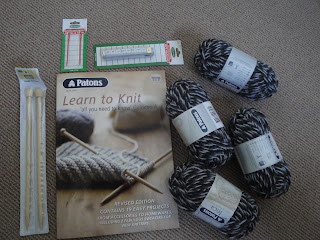 I ate lunch at Queen Street Mall.  I don't want to tell anyone what I ate.  It was a horrible choice.  Fish and Chips.  It's like the most popular food in Australia, and I have wanted to try it ever since I got here.  So I had it for lunch.  The longer I am traveling the harder I am finding it to eat right.

The buses were not running right today.  The bus from Capalaba to downtown runs every 30 minutes.  I waited for 1 hour and 10 minutes before a bus came that told me it was going into the city.  At one stop everyone got off and the driver told me I had to get off, too.  So I had to catch another bus into the city.  I finally got there.  Coming home, everything worked like it was supposed to.

At Capalaba Central I bought toilet paper, corn on the cob, watermelon, and chocolate at The Sweet Shop for a thank you gift for David.  He had mentioned earlier that he loves chocolate, so I got him a little gift box with 1/2 block of five different types of fudge.

Facebook has not been working for me because they blocked my account.  They didn't recognize the device I was using to access my account (David's computer).  It's unblocked now, thank goodness.  Travis was getting worried about me.

Supper was raw corn on the cob and watermelon.  David and I watched the movie The Last Samuri starring Tom Cruise.  Then we watched a documentary about Australian Road Trains.  Road trains are big semi-trucks that pull two, three, or more trailers.  David is a truck driver, and he has driven a road train before.  The film showed a lot about Australia from a trucker's viewpoint.

I got packed as much as possible so I'll be ready to head to Cairns tomorrow.
Posted by Janis Hopper at 2:53 AM