I got to talk to Travis on Skype this morning.  I was lucky enough to find free internet for a little while this morning from my room.

I commented on one of Richard Crozier's posts on Facebook about personal responsibility and a guy named Steve Dupere followed up.  I thought what he wrote was good and worth sharing..."High blood pressure...take a med?  Try eating celery daily and dropping the bacon, ham, potato chips, coffee and so on.  Put down the soda and try a smoothie or, God forbid, water."

I walked to Central Station to catch the HOHO bus at 8:30, but since they weren't going to leave until 9:00 I walked to Darling Harbour.  It's a nice area and the view of the harbor is beautiful. 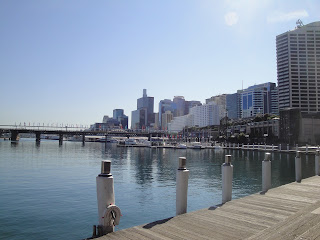 I went to the Imax Theater which has the largest screen in the world.  It's over seven stories tall.  I saw Born To Be Wild in 3D.  The 3D was awesome.  It was an inspiring story about Dr. Birute Galdikas who adopts orphaned orangutans in Borneo and Daphne Sheldrich who adopts orphaned elephants in Kenya.  They rescue the babies and raise them in a way so they can be released back into the wild when they are ready.  Heartwarming story.  Imax ticket...$19.50.

I walked to King St. Wharf and checked on the ferries...trying to figure out how this works. 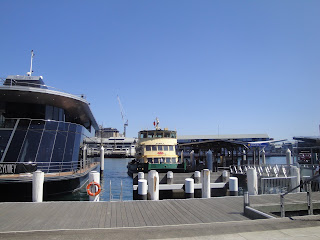 I had lunch sitting on a park bench at Tumbalong Park at Darling Harbour.  Lunch was avocado, grapefruit, banana, and mixed seeds/nuts/sultanas. 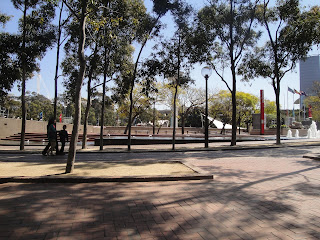 I toured the Chinese Friendship Garden.  Admission $6.00.  The garden was designed and built by chinese architects and gardeners from Guangzhou, China.  It was peaceful and serene.  I had a cup of jasmine tea in the tea house before I left. 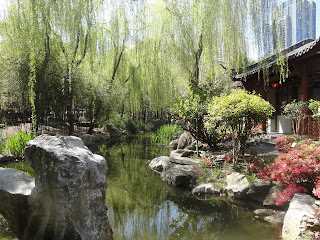 I caught the HOHO bus to Circular Quay.  There was a fruit and veggie vendor on the corner.  I bought a pear, avocado, and mandarin for tomorrow.  I checked out the ferries here, too.  There were two aboriginal guys playing a didjeridu.  I love how it sounds and thought about buying a CD...but I probably wouldn't ever listen to it at home.  I bought some salad dressing at the deli. 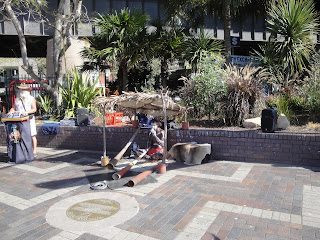 I rode the HOHO bus back to Central Station, dropped my bags off at my room, then walked several block up George Street to get a salad from Subway.  Salad at Subway is $6.00.  Everywhere else it is about $11-13.

I wish I had a day pack so I wouldn't have to carry my bags on my shoulder.  I have one in my closet at home, but I wish it was here with me.

I went to the lounge for free internet, then took a cold shower and washed my hair.  The water fools you.  It acts like it is going to be warm until you get in.  Then it goes cold on you.  By the time I rinsed my hair, it was very cold.  The good thing about that is that it makes my room seem not so cold.

I ate supper in my room.....avocado, salad and seeds/nuts/sultanas.  Today was a good day with eating raw foods.  It's not difficult if you have your food readily available.

To health and happiness.
Posted by Janis Hopper at 12:49 AM