I'm getting up too early.  3:30 is too early.  I used the time to work on my Facebook page.  I put up some of the Sydney pictures and talked to Travis on Skype for a little while.

I walked from my hotel to the Big Cat Green Island Reef Cruises Terminal.  It was a 35 minute walk.  At 8:30 we began to board our boat. 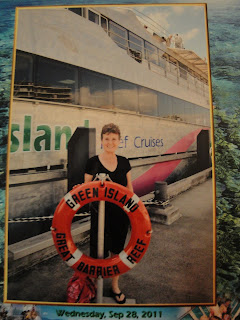 I met a young couple from Peking, China (aka Beijing, China).  She was fluent in English, and we talked during most of the cruise.  I learned some things about China  It reminded me of my conversation on the airplane with John Newton who said China is THE new super-power. I am interested to learn more about China. It is very expensive to live in Peking, but most people want to live there even though it does cost much more.  This is where parents can get their  children into the best schools so they will have a chance at getting into a good university.  There is a strong emphasis in math in these desirable schools.  It is competitive and you have to put forth much effort to put yourself into the top.  Shan (the name of the Chinese lady) and her husband live in the city, but she travels an hour one way to get to work.  She went to school for three years in Finland, so she is fluent in Finnish as well.  She's studying French now, but only gets to practice five hours a week!   She said the industrialization of China has led to much pollution...much worse than in Australia.  Shan was interested in the simple, natural life I am studying here  She acknowledged that some of that would be healthier.  She said maybe China will be going that direction in another 50-100 years, but right now they are in an urban, industrial mode.  I was impressed with Shan and her husband.  She mentioned Tiananmen Square...When I mentioned it she smiled and asked if I was familiar with it.   I told here that at my home we have the picture of the young man standing boldly before the tank in Tiananmen square demonstrating the courage of the human spirit.  She has my contact information and hopes to come to the States soon.  Maybe we will meet again.

Shan and her husband apparently have a good relationship.  They had fun together, they were intellectual equals, and seemed to be equal partners in the relationship.  In the Asian communities, for the most part, it looks to me like the women are strong and on equal footing with the men.

Another interesting conversation I had with with Shan and her husband on the trip home was about Chinese fortune cookies.  They laughed about them, because they have never heard of such a thing.  I explained that in the States at Chinese restaurants one always receives a fortune cookie at the end of the meal which contains a little bit of advice such as...Work hard and you will succeed.   The husband said that in China the closest thing he has seen is a custom of putting a coin inside a dumpling.  If you are the one that gets the dumpling with the coin inside then you are the lucky one.   I told them when they come to the States I will take them to a Chinese restaurant where they can get a fortune cookie.

The boat docked at Green Island.  It is not a very big island.  I think I could have walked around the whole thing in an hour or so.  There is a luxury resort on Green Island which looked like a nice place to vacation, if you like to Scuba dive.  That's all there is to do on Green Island...swim, snorkel, scuba dive, eat and drink.  I walked around on the beach and waded in the water. 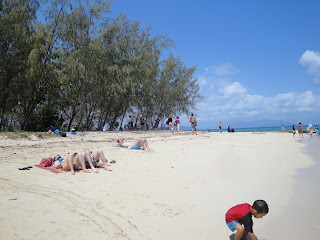 At 11:45 I went on the semi-sub tour where we sat below water level and looked out at the coral and the fish.  We saw a sea turtle, a barracuda, bat fish, sargeant major fish, giant trevally, emperor fish, and more.  This was scuba diving for the faint-hearted. 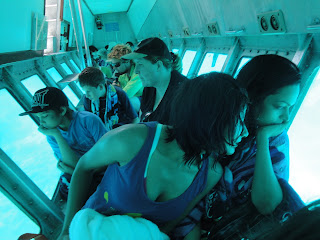 I ate the buffet lunch which was served on the boat.  My lunch was watermelon, a lovely salad, coleslaw, rice, and penne pasta.  Part raw....part cooked....all vegetarian.

At 1:15 I went on the glass bottom boat tour.  This time I saw the coral and the fish by looking down from above.  This was snorkeling for the faint-hearted.  Coral is an animal and not a plant.  Although the coral does not move around on its own power, the branches we see are groups of animals that are similar to little jelly-fish clustered together.  The colors of the coral and the fish are not what you would expect.  Although the coral and the fish are brightly colored this is not apparent as you view them under the water where the light cannot penetrate.  The coral to us looked brown.  A fish that looked to us to be brown with blue spots would be red with blue spots in brighter light. 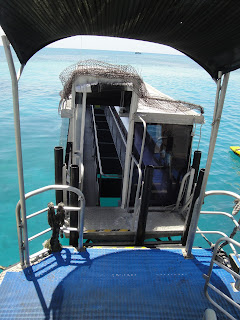 In the afternoon, I tried to lay out on the beach, but about ten minutes in the hot sun was all I could manage.  I bought some postcards, a bottle of water, and an orange.  I sat at an outdoor table at the restaurant and read my book.  About 3:00, I decided I'd had enough and went back to the boat to await the 3:45 departure.

I met a wonderful Vietnamese family from Sydney.  The mother left Vietnam on a refugee boat in 1982 at the age of ten.  Out of the eleven children in her family, eight of them left Vietnam as refugees.  Her parents and three siblings remained in Vietnam.  She was in Singapore for three years before immigrating to Australia.  Her daughter is 14.  Her son is 10.  The children included me in their conversation and when they left to go run around the boat the little boy turned back and waved at me.  I said, "They are so cute."  She said, "They are gorgeous kids".  She told me she had raised them to be respectful to all people...young, old, rich, poor.  I said, "How did you teach them?"  She said by talking to them...talking a lot.  She said she still talks to them and keeps the communication open.  The kids have all the Western advantages of i-touches, camera, vacations at Hong Kong Disney World, etc., but they still showed people the respect they had been taught by this soft-spoken, loving Mom.


She told me about life in Vietnam now.  Things have improved, people are freer to travel, but there is much poverty.  A few people are rich, but most are kept in poverty by a government that controls the population by controlling the food.  Not many have the courage to speak out in opposition of the government because the consequences are dire.  One egg cost more than most people can afford to purchase.  Before communism, the families had small farms or vegetable patches where they grew food organically and were able to have chickens or other small livestock.  Now the only food available to them is chemically grown, mostly imported from China.  The communist government does not allow the people to plant any food.  They are not allowed to farm or plant a garden.

Farming and gardening is a threat to governments that want to control the population.  To be a free people we must be able to grow our own food.  That is a right worth speaking up for.  In the free world we need to be aware of large corporations taking control of seeds and water supply.  Free people must be able to feed themselves.

We docked at Cairns at 5:00.  I walked to Woolworth's and bought a salad, a piece of watermelon, Brazil nuts, two oranges, and an avocado.  I got to the hotel about 6:00.  Supper in my room was watermelon, salad, and Brazil nuts.  I spent the evening on the computer and getting everything ready to go to the farm tomorrow.
Posted by Janis Hopper at 8:58 PM