I hardly slept any last night.  Excited about going to Sydney, I guess.  I got up at 5:30 and got everything ready to go.  Bruce took me to the bus stop at 6:30, and we got a chance to visit a little bit as we waited for the Airport Shuttle top pick me up.

Bruce Standish is a remarkable person.  I'm convinced a TV series could be centered around him, his shop and his customers.  He owns this little organic shop on Ormond Rd in upscale Elwood.  He lives very simply behind and above the shop.  I don't know how to describe him.  He is a shy, quiet, unpretentious man who works night and day in this shop.  The shop and his residence is completely covered up in produce and things related to the vegetarian society.  He has been a vegan since he was four years old.  He is always giving people free information to help them choose a healthier way of eating.  The customers love him.  Some call him Brucey.  They invite him to dinner....he usually declines.  Robin said, "He is a saint.  He's going straight to heaven."  The reason I was treated so well in Melbourne has nothing to do with me.  Everyone was nice to me because Bruce asked them.   I invited him to Arkansas, and I think he may come if he can find someone to mind the store.
Going through security in Australia is sensible.  There was none of this removing shoes, jackets or belts.  All you had to do is put your laptop in a container and your bags on the conveyor and walk through the metal detector.  Fast...no hassle.

The flight arrived in Sydney 15 minutes early.  I called Sydney Central and they called a shuttle to pick me up.  They said 20 minutes, but it ended up being 1-1/2 hours.  I stood patiently by the Shuttle Pick Up sign  and called Sydney Central three different times to check on the situation.  I wish I knew the name of the angry Asian that was the driver on this Sydney Shuttle.  He was mean and obviously hated his job.  He dropped me off last and it wasn't the right place.  I told him he was supposed to take me to 428 Pitt St.  He started yelling at me.  I told him he was responsible for making sure I got to the right place and he should be more helpful.  He got me there, but he wasn't happy.  He threw my bag on the sidewalk.   Then he wanted me to pay him.  I told him Sydney Central called him to pick me up, he would have to get the money from them.   I'm glad I don't have to deal with him everyday.  Gee Whiz.

I walked around for a couple of hours trying to figure out my environment.  I came across some street musicians that were quite good. 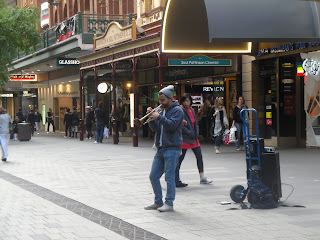 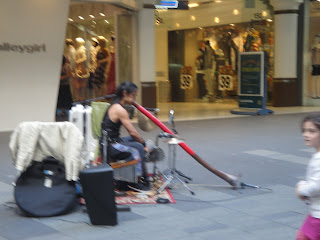 I didn't eat any food today until supper.  I got a salad from Subway and some take-out rice from an Asian place.  I ate in my room.  It was so good...I was starving.

I don't think hostel life is for me.  I feel safe here, and everyone but the shuttle driver is nice, but there is no elevator and my bags are heavy.  I'm up on the 3rd floor.  The room is cold, and when I got my shower there was no hot water.

I went to the lounge a little while after I ate to access the free wi-fi, then got that cold shower.

I spent the rest of the evening in my room reading and trying to stay warm.

To health and happiness.
Posted by Janis Hopper at 12:52 AM